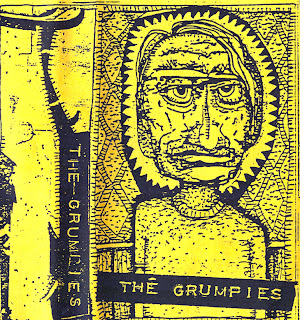 My friend, Angie mailed me this tape in 1996 after seeing The Grumpies at American Beat Records in Birmingham, AL.. In her letter, she described these high-pitched, hyper-fast, pop-punk weirdos as being kind of alien and insane. I put in the tape and my life was completely changed forever. I couldn't believe that the recording wasn't sped up because their voices were so high pitched. The songs were (and still are) instantly infectious and I became literally addicted to this tape. I wrote to the band and begged them to come to Huntsville, AL. They did and blew everyone's minds with their live show
I was so enamored with them that when their drummer quit the band to join the Army Reserves, I volunteered to play drums for them and did so for the next 3 years....then shit got really insane.
There is a secret alternate copy of this demo that was recorded BEFORE this demo that I may post one day...unless the former members beg me not to let it see the light of day.
Thanks to Tony Levi and Mike Wilson with the original uploading help on this one. 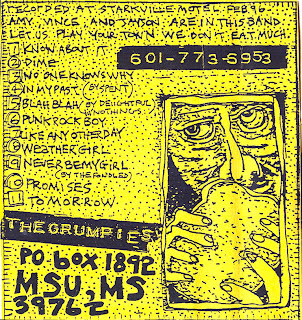 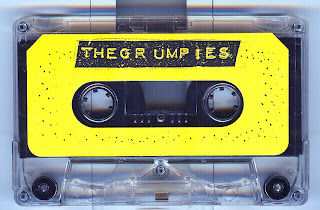 A f'ed up fourth generation dub of this demo lived in my backpack for about two solid years. I listed to this damn recording probably about 100 times while walking around and driving in Berkeley in the early 2000s. At one time, I'm pretty sure that I had the entire thing committed to memory...I could sing along with every song.

Thank you so much for posting this Greg! I haven't heard it in eight years. Damn thing was stolen out of my car and although I've attempted to track down a copy since, I was never able to pin it down.

You are very welcome, Josh! I'm so sorry that I flaked time and time again on dubbing a tape of this for you. You can pretend that I put up this post just for you, if you'd like...sorta like the 2011 version of mailing you this tape.

Welcome, Greg!
GRUMPIES were total magic live, and this tape is still so damn good. I've been meaning to put it up for months, but I am happy that you beat me to it.
Enjoy the coming hours of editing and converting and writing and listening and rationalizing and reliving!

Thanks for putting this up. I loved this band and saw them in New Orleans in maybe 98 or 99? Also loved Whitetrash Superman.

I think everybody who saw these guys has their own special story. Mine happens to be from the first time I saw 'em at a house show in Auburn sometime in '96 or '97. The week before the show, Leslie Graham was jamming this demo in her car as she drove me to Karloff 2056 practice (I had no car my freshman year). I thought it was interesting enough and decided I'd check 'em out when they came to town.

So they came to town. They took a little while to set up as I recall, but I may have been drunk and 5 minutes mighta felt like 20. Anyway, they blasted through maybe one song before Jason, in a fit of guitar frenzy, jumped atop his amp, which had wheels, and proceeded to knock out the ceiling fan's lights and wreck Vince's drums. So they had to set up their shit all over again. This again took some time, what with the damage that had been done. But the crowd was patient because of the infectiously chaotic spectacle (and tunes) that The Grumpies were becoming known for and which was proven time and time again as their own inimitable trademark. Sorry for the flowery words. Just memories of good times I guess. Sniff.

This is not to mention Jason's pop genius and layers upon layers of interweaving guitar hooks ("No One Knows Why"... fuck! so good!). Awesome you got to play with these guys. I remember good shows with you on drums as well.

I have no memory of sending this to you OR introducing them to you! Ha!! I'm proud of my 1996 self.

Good work, Angie!
Good work, Keefe! Great story!
One time I was playing a show with the Grumpies on a half pipe and during a guitar solo, Jayson ran up the half pipe and fell backwards into a back flip (twice) and then flung the guitar all the way around him, kept doing the solo and then flipped it around the other way (by "guitar flip", I mean this: http://www.youtube.com/watch?v=tO1Ktg5FMYg&feature=related . ) and then finished the song. I was laughing really hard afterwards and Jayson was like "What? Let's do the next song"

O shit. one top favorite from the ancient past. I remember seeing these dudes at the fair grounds in Huntsville. Blair climbed on Greg's car, unbeknownst to him. Then Greg hauled ass across the huge dark parking lot spilling Blair across the pavement. The Grumpies had to stop playing when everyone realized Blair nearly died. Despite all that the Gs still killed it. I have been thinking about this tape for however many years pining that I'd never hear it again. Greg, thank you. I'll send you a real letter.

I LOVED THE GRUMPIES! I had no idea this tape existed! I'm thrilled to add it to the 7" and CD recordings. I released their cover of "Time After Time" on the "Totally F***ing the 80s" compilation so many years ago. I never had the chance to see them live but have enjoyed reading everyone else's stories. Thanks for posting!

I love your blog, I have been in love with One Reason for years and stumbled here. You posts have DJ'ed my whole day. The only thing I can't find is the Grumpies S/T 7". It is out of print and all the links on other blogs are old/inactive. I guess I am going to have to order the Who Ate Stinky CD...

Thanks! That is really kind of you. I'm glad that you and other people are enjoying it. I will put up that Grumpies 7" eventually. It has 4 of the same songs as this tape (different recording though), but I think the tape version is more energetic and better. I just tried to look around the internet for that 7" and had no luck. I'm also going to eventually put up "Who Ate Stinky" since it's only available on some pop-punk blog and it's for sale on Itunes. I played drums on it and I don't see any reason that anyone should buy an Mp3 copy of it. Also, who knows where that money (if there is any) goes to? I know I've never seen any of it.

I did see the pop punk blog, but that link is dead too. I look forward to any of the other recordings because I'm a completest and the demo has been on heavy rotation all evening. Cheers and thanks again!

love. thank you so much for this! I have mp3s of the 7" (i have the 7 inch somewhere too hand colored by Jason!), that I think i ripped off of youtube forever ago. I'd be happy to send them to you. I remember seeing the Grumpies play at the Starkville msu Y / above the old campus post office. That was a weird venue. Cleveland was better! I miss it all so much. hit me up at davidlowellwinton —gmail.com if you need the 7" mp3s.

Thanks for post this! I had this tape from when I saw them in Huntsville (in '96 maybe?). Then my first day in Auburn in fall of 1997, I saw a flyer for a Grumpies show at Malformity.