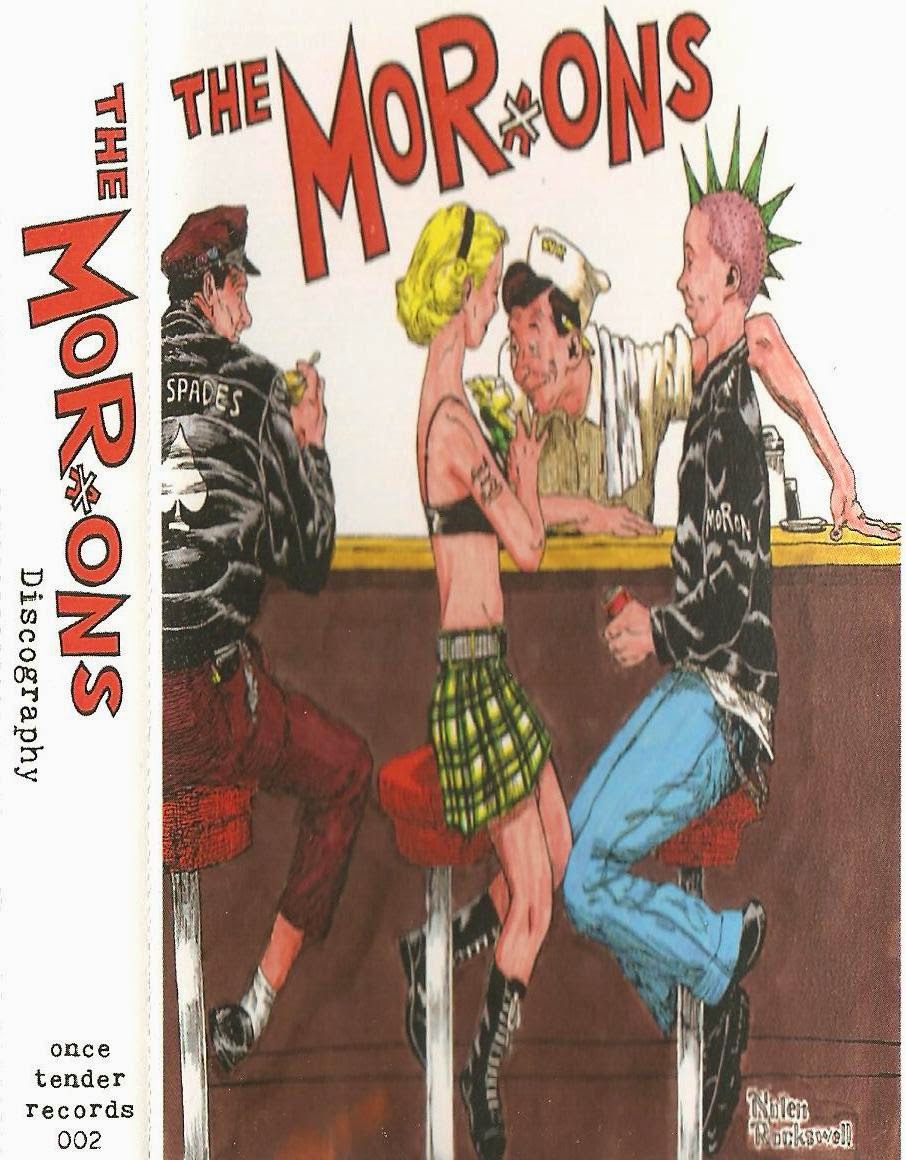 I meant to upload some old MORONS tapes ages ago, but I held off because Once Tender Records was planning on putting out a complete discography. Now, I realized it's been out for a couple of years, so here's the whole thing.
THE MORONS were from Chatsworth and Dalton, GA: two towns in north Georgia that have bred a stunning array of truly unforgettable people in my life. THE MORONS formed (probably) out of utter boredom and a love of substance abuse. I've never really seen a band live up to their name more than THE MORONS. From huffing copious amounts of gold spraypaint to throwing themselves down flights of stairs to their special game of "Sneaky P" to many other things that I don't feel that I can share here without clearing it with them first, THE MORONS were one of the most real bands I've ever seen. I know that punk celebrates (or "should celebrate" as far as I care) the idea of "no idols" and strives to blur the lines between audience and band, but THE MORONS were truly the same on or off the stage (or "stage"). You know that dude you were just shotgunning a beer with by the dumpster? Now, he's that dude shotgunning a beer behind the drumset, for better or worse.
Anyway, THE MORONS came from trailer parks and shitty situations and put it all in their songs. They got drunk and then wrote classic songs about being drunk. When they said "smoke some crack and go for a beer run", they had probably just done that. They didn't waste space or deal in hyperbole. If you're from a certain time and era (like me), they wrote one of the best songs of all time, which was about living with the spirit of rock n roll inside of you, which no one could ever steal. THE MORONS were utter morons, but they were also musical geniuses.
Here's most of everything they ever recorded, culled from self-released tapes, unreleased studio recordings and their EP's. If you want a tape of your own, follow that link above and write to Chad at Once Tender. 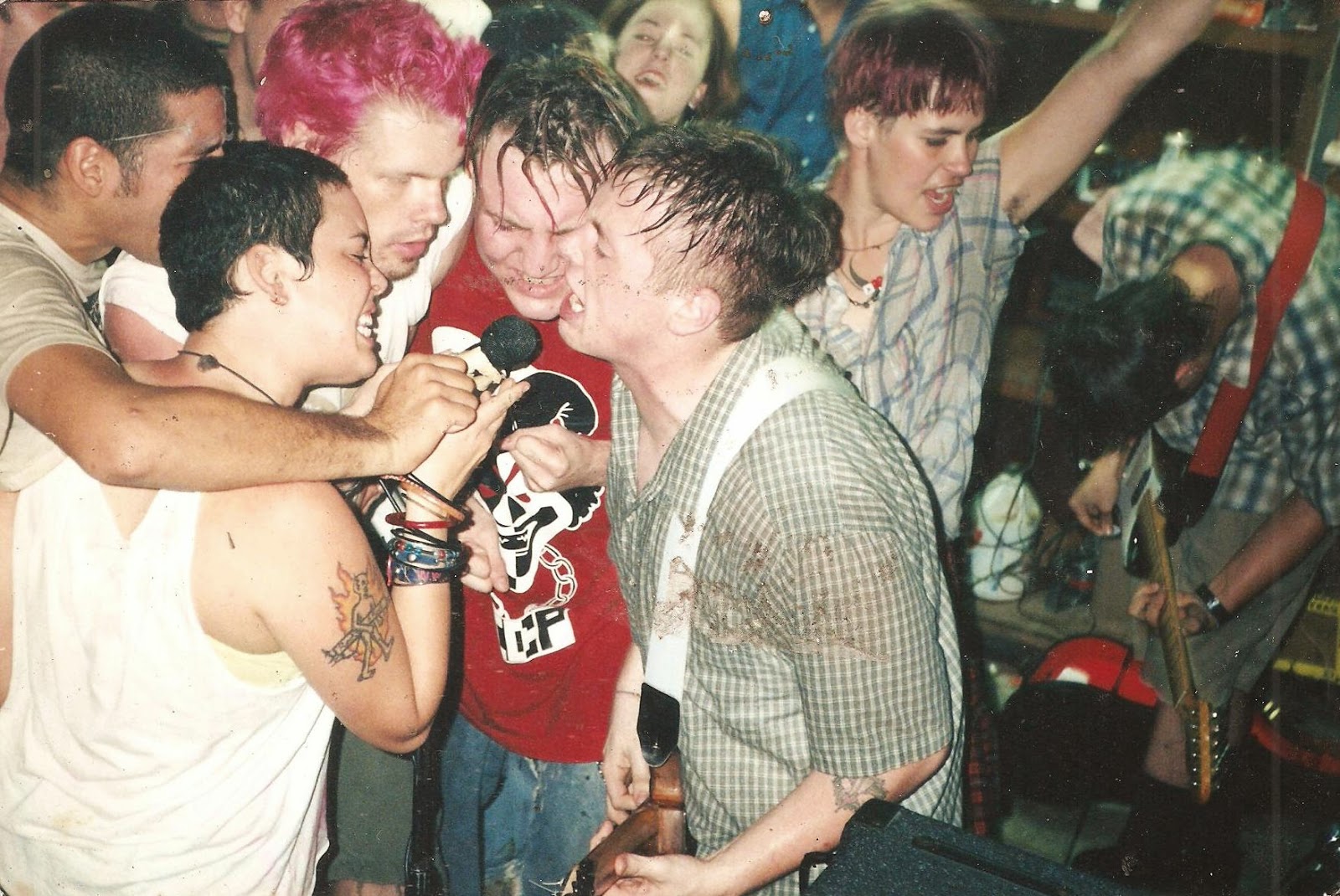 MORONS in Dalton, GA. Photo by me.

This one's for Big Shank.


ADDENDUM 8/8/19: I re-uploaded this because I've been listening to THE MORONS a lot lately and I also wanted to add this note. I went to the Chattanooga punk fest known as Do Ya Hear We last year to see some very dear friends and play in some very dear bands. I had a great time. At some point in the weekend, a member of THE MORONS took me aside to talk about what I had written above. Where I saw nothing but complete praise and adulation, he saw a mockery. He saw his youth frozen in time, played out as a joke. He saw me ending the piece calling him and his bandmates morons, not geniuses...and he is right. Imagine going to read something about about your old band and the author just calls you a Moron and leaves it at that. We talked it out. We hugged and let it go, but I just wanted to add this. THE MORONS were what they were and they represented what we all were at that time and it was beautiful. The people in this band went on to grow up and become enthusiastic dads, animal-lovers, great friends, supportive husbands and even a ship captain. They still write music that is a celebration of life and love that is rooted in anything other than moronic pursuits and I salute them for that. THE MORONS made an impact to me and a whole huge scene of people because they wrote what they lived and it was real. A lot of bands try to claim that but very few actually follow through. So let's just say they were musical geniuses and leave it that, okay?
Posted by Harvester at 11:08 AM

I haven't even heard this yet and I already love it.

I found a 7' in Little Rock years ago and fell in love with it. glad to hear more!

Everyone's entitled to their Morons memories. Its nice to see it available for the masses that missed it.