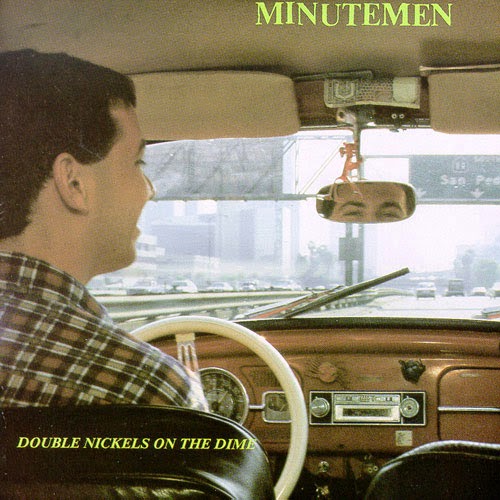 I was never a fan of new, popular music on the radio. Even as a little kid, I kinda liked Michael Jackson and Van Halen, but still thought it was boring. In the 4th grade, due to having a cool older sister, my favorite bands were VIOLENT FEMMES, THE CURE and METALLICA. In the 6th grade, I stumbled across an amazing mix tape that contained my first exposure to THE STOOGES, VELVET UNDERGROUND and a little band from southern California called THE MINUTEMEN. When my prepubescent brain first heard the opening warbly chords of "This Ain't No Picnic" something clicked. The hair on my neck stood up. Hearing D Boon's voice scream out a mantra against shitty jobs in a voice that wasn't shaped by mass media or sales charts was truly inspiring. I had never heard punk before, even though it had been sitting there and waiting for me for my entire life. I tracked down "Double Nickels on the Dime" and dubbed a tape of it on a shitty stereo...well, I dubbed as much of it as I could onto one tape. I listened to that tape hundreds and hundreds of times before I ever tracked down my own copy of the record. Their ideas, commitment, politics and drive has inspired me more than any other punk band in history. There's not really much I can tell you about this record that hasn't been said before (ad nauseam), but I'm bringing it up for a reason.

Yesterday was the 20th anniversary of Kurt Cobain's suicide. When I first heard NIRVANA on the radio, it was a little bit of a magical feeling because the airwaves were populated by music that was, in my opinion, horrible, trite bullshit. It wasn't a life changer for me though. I was already listening to the MINUTEMEN every fucking day. I had already taught myself "Blitzkrieg Bop" on guitar. But, to hear the opening chords of "Smells Like Teen Spirit" on the radio was welcome after hearing BEL BIV DEVOE. That feeling was soon squashed after every single radio station in the world, as well as MTV, played that fucking song into the fucking ground. Seriously. Sometimes, DJ's would just play that song on the radio for an hour straight. It sucked. "Bleach" was a mediocre album. "Nevermind" was pretty good, but "Drain You" should have been the hit. "In Utero" owed too much to THE MELVINS (uncredited) and had some seriously weak songs. BUT, I always appreciated how real the people in NIRVANA seemed to be. It seemed like they were just some doofuses who got thrown into the limelight and didn't know how to handle it. I like that they publicly fucked with Axl Rose. I fucking love that they told people to not buy their albums if they were fucked up rapists. I've always been utterly confused about the amount of praise that they've gotten, but I also completely understand why.
I found out that Kurt Cobain killed himself on the night of my junior prom. I thought it was sad because he had a lot of potential to do interesting things and use his fame for cool shit. There won't be another rock star like him, which is fine. Would he even enjoy this future we've found ourselves in?
Posted by Harvester at 4:07 PM

hey i lurk plenty, but i have to speak up when you say "Their ideas, commitment, politics and drive has inspired me more than any other punk band in history" about the Minutemen, because the same words would/have come out of my mouth.

and it's weird that you bring them up in the context of Nirvana being remembered/written a lot about recently, and yeah i feel like the music was good, not great, but in context pretty wild. but seeing all these pictures of the 3 (4) of them and seeing all the levels of awareness and rejection of fame and privilege in their eyes, and fun and awkwardness and fear and insular/us-against-them camaraderie. Fucking doofuses who could really give a fuck what 99% of the world thought. Wearing dresses or tucking in their shirts.

Not sure what it all means. Thanks for doing what you do. No matter how much i love or hate the music up here, i ALWAYS love reading the stories. thanks.

Was definitely working in the "scraping room" at the U of Oklahoma cafeteria the first time I heard it on the radio. Just kinda stopped for a minute and listened. The bologna sandwiches and chicken fingers started to pile up on the conveyor belt though, so I had to get back to business before the song was over.