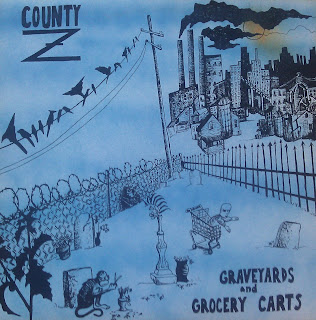 I was already a big fan of COUNTY Z's first tape when this LP came out, but I was not prepared for how this record would impact my life. That tape is really good, but the band seemed like they were at their peak performance when they recorded this. The moody, dark arrangements like "Betsy II" and "End Of The World" became even darker and more ominous. The more upbeat songs like "Liquor Store" and "Hysterical" became incisive, vicious and bitter. I don't know what was going on in the vast, humid, art-strewn warehouse in New Orleans where they recorded this, but they definitely did something right. It still remains one of my top five favorite albums to this day.
I was lucky enough to see COUNTY Z play in a basement in Bloomington, IN during this period and it was one of the best shows ever. Less than a mile away, helicopters were circling and sports fans were flipping over cars and uprooting trees because their team lost (or won, I don't know or give a fuck) while 50-60 punks were dancing in a basement on the west side of town. Bloomington is usually a pretty "arms crossed" kind of town when it comes to punk shows, but that night, it seemed like the whole room couldn't stop themselves from dancing like crazy. I'll never forget it. 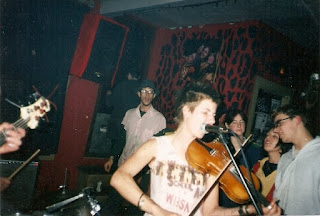 COUNTY Z at the Hi-Ho in New Orleans. 2002
Naomi plays violin, guitar and sings in the band. She is now playing in MOTHER OF FIRE, which is a little similar to COUNTY Z, but more sprawling and epic. Ryan plays bass. I see him from time to time walking around SF and I always mean to hang out with him more, but I am terrible at hanging out unless it is convenient to me (this is why I am a bad friend). Forrest played the drums and now he is a father. I will always love this band. 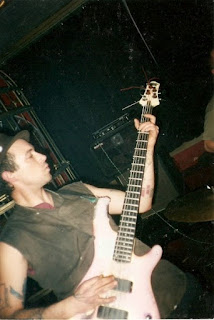 COUNTY Z at the Hi-Ho in New Orleans. 2002
Download COUNTY Z LP from Ass Records
Posted by Harvester at 12:37 AM