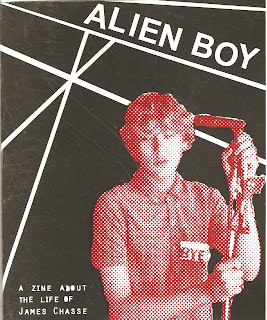 Two of my friends, Erin and Icky, put this zine out years ago but it somehow eluded me until very recently. Erin gave me her last copy and I promised her that I would archive it digitally, somehow. So, here it is.
James Chasse was a staple of the early Portland, OR punk scene back in the late 70's / early 80's. By all accounts, he was at every show, he made zines, played in a band called THE COMBOS and always had a kind word for all of his friends. He suffered from schizophrenia for most of his life and his parents even shipped him off to a mental institution when he was still a teenager. James (or Jim-Jim as many of his friends knew him back then) was a big inspiration to Greg Sage and provided lyrical ideas for some of the songs on the LP "Is This Real?" In 2004, James (who had no criminal record and was not suspected of any crime) was beaten to death by Portland police officers in front of a dozen witnesses. They tasered him repeatedly and broke 17 of his ribs. The death was ruled to be "accidental" and the officers involved were cleared of criminal wrong-doing and placed back on active duty.
If any good can come out of this, the court case ruled that officers are now required to undergo a 40 hour training that prepares them to work with mentally ill people in crisis. I work with mentally ill people every day at my job and I wish this training was mandatory for all officers. I've seen people get thrown on the street and hog-tied just because they yelled at a cop. I barged between a client and 5 cops once because the cops were about to attack him for simply muttering "fuck you guys." (miraculously, that worked...I think only because we were in a house where I worked and not on the street). Police shot and killed a mentally ill man at a BART station simply because he was waving a knife around...and people were on the platform waiting for trains. This kind of training definitely needs to happen more often because cops are acutely aware that they can kill people and get away with it, especially if the person is "crazed", "homeless" or "aggressive". (also, "gang member" or "illegal immigrant" works as well).
This download contains a PDF document of the entire zine (Thanks for the help, Kyle) along with an audio interview by Erin Yanke and a radio show about James' life that appeared on Circle A Radio. The zine contains stories and quotes by Greg Sage (of The WIPERS), KT Kincaid (of the NEO-BOYS), Jason Renault (of the Mental Health Association of Portland) and many others. There's also snippets of James' old zines as well as amazing pictures from the early days of Portland's punk scene. Thanks to Erin Yanke for giving me permission to put this all online. 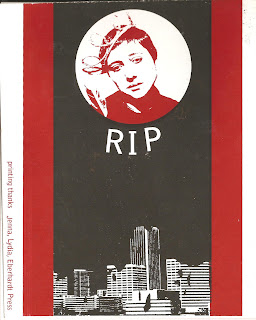 For a lot more info on this whole court case and the aftermath, please check out Jameschasse.blogspot.com

EDIT: 2/18/13: There is now a movie about the life and death of James Chasse which just premiered last weekend in Portland. You can find more info about it at AlienBoy.org
Posted by Harvester at 1:30 PM

great post about a shitty avoidable tragedy, and one that happens way too often.
i've worked with developmentally delayed children, and it;s tough enough getting adults or even other kids to take them seriously or give them respect. (one girl's grandmother was deaf, so her mom grew up learning how to speak from a deaf person, and she grew up learning to speak from her mom. IN THE SPECIAL EDUCATION CLASS YOU GO.)

thanks for posting this.