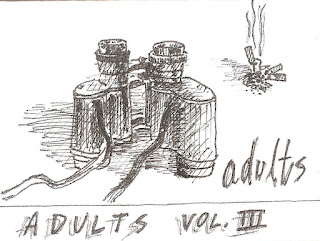 I'm a big fan of this band, as you can probably surmise by my previous write-ups of their tapes "Vol I" and "Vol II". On this third installment, ADULTS switch it up a little and start off the tape with possibly their first slow song ever, called "Amigo". From there on out, it's all breakneck tempos and staying true to their sound of a lost demo tape from some old classic band. They churn out 10 fucked up, straightforward, blown out, fast punk songs in less than 11 minutes. Not one song on here is a sleeper. Just download it and thank me later. Or really, thank the band. I'm just some clown with a laptop.

WAIT THERE'S MORE!!! The thing I liked about ADULTS when I first heard them is that they lived just across the bay from me and completely ruled but I had never heard of them. When I finally tracked them down and saw them play a show, they didn't disappoint. I met their singer, Matteo who I had previously corresponded with only through email. He had been nice enough to mail me their first tape before I even sent him any cash. Talking to him after their set, I realized that he's a really nice guy, a genuine fan of energetic punk and really excited about seeing this huge country of ours. You see, Matteo  isn't from this country but I believe that if people want to live in this country, then they should. He told me that he was going to roadie for his friend's band up to the Northwest soon and then take a Greyhound bus out to the Midwest. He said that he was really excited about the trip. Being someone that has taken the bus across this vast country a number of times, I didn't believe him. I said "It's horrible! You have to just sit on this fuckin' bus for hours, talk to creeps, look out the window at nothing and then they only stop at McDonald's to eat!" He smiled really big and said "I KNOW!! I want to do that exact thing!! I want to see the sun coming up over plains and I want to talk to strangers and I want to eat the crappy food and see what it looks like in the middle of nowhere America." He was so happy about this prospect that I was completely dumbfounded, but also I understood. When I went to the lonely, desolate border of Slovakia and the Czech Republic, I took pictures of the drab buildings sitting in the middle of nowhere. I was somehow fascinated by this entirely boring scenario that would cause any local to roll their eyes. The great part of this story is that Matteo made his way up north and then got on a bus going east. The sad, awful truth is that he was traveling on September 11th...a time when our nation's law enforcers decide to get really shitty to anyone who is not supposed to be in this country. Long story short (well, too late for that), Matteo got ID'd by the cops and they discovered that he was illegal. He is now sitting in a Federal detention center in Buffalo, NY and facing deportation. It's all so sad because he really loves it here and has made a lot of lasting relationships with people all over the Bay Area and beyond. Friends of his have set up a fundraising page to raise money for a lawyer to fight the deportation. If you can offer any help, get in touch with them. Follow the link to their site.

I surprise! I talked with Matteo 9-7-12,He Had to send more adults tapes to spain,told me of a trip a couple of weeks.THIS IS HORRIBLE!!!!please greg can't tell me de address to send
money to help Matteo!!!He have a paypal addrees!! please tell me where...........

You can contribute at this address.

Friends of his are putting together benefit shows in Oakland and San Francisco as well.

Hi greg, thanks so much for this blog. it means a lot to so many ppl. i've really been digging the adults vol i and ii tapes but i guess the link for vol iii is deleted? do you know how i can get ahold of this?

I'm currently living in the philippines as a peace corps volunteer and the mail system here is horrendous. almost impossible to ship something from the states without it being opened/tampered with, and even then you're lucky to get it at all.

anyways, let me know man! and also thanks for posting peter stubbs blueberry masturbator…one of my all time faves for sure

Hey Charlie
I updated it with a new link. Thanks for pointing it out.
I've been listening to that Peter Stubb tape a lot lately. Also one of my all time favorites.
Take care!