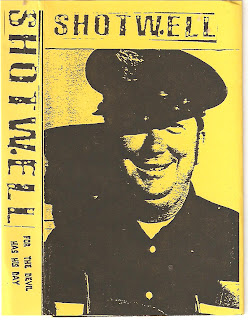 SHOTWELL has put out so much stuff that it's ridiculous. They released this tape back in 2001, which was supposed to come out as a CD on S.P.A.M. records, but that never actually happened. It was released later as a CD on Plan-It-X and packaged in an elaborately sloppy, glued together sleeve. Among many SF SHOTWELL fans, this one is not as popular as their others, but I love it. It starts off with "We're Not Alone", one of my favorite SHOTWELL slow jams to date. It features Jimmy's famously sloppy guitar skronk, Buzz and Jimmy's lax harmonization and even an accordion. Buzz's friend, Ken came out from Delaware and ended up as drummer #10 (or so), lending his own style to the band and helping to make a different sounding record altogether. It's good. Just listen to it. 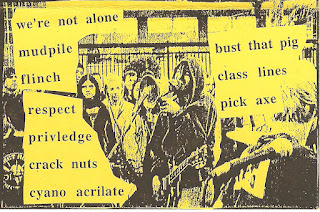 To learn more about SHOTWELL and hear more of their stuff, you can check here, here, here and even here. 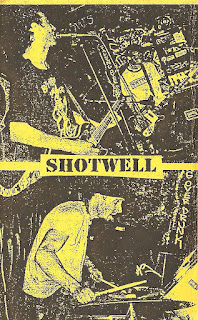 Posted by Harvester at 5:35 PM

Recorded by Matty Luv too! S.P.A.M. actually made the CD, but the label folded before the art could be printed. So we gave the CDs to Jimmy for free and that's why if ya look on the Plan-It X CD you'll see a S.P.A.M. catalog number.

A little bit of shitty history...

this is actually my favourite Shotwell recording I think-- which is saying a lot coming from me!

er, I mean cause I love Shotwell so much, not cause I'm such an awesome judge of these things...

It's no longer available.

thank's But I have a cd a boy on bicycle cover,but I would like the tape!!! Gracias!

I wish this came out on vinyl. I been trying to get in touch with Jimmy a couple times throughout the years with just that idea with no luck. ;)

It's my favorite thing we did also, though it wasnt fun recording it. I wish it had come out on vinyl too