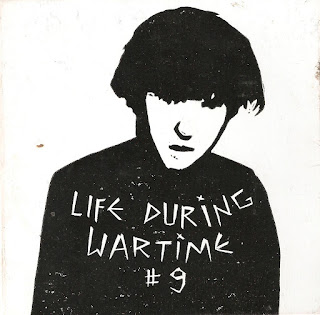 I'm a big fan of used record stores, street sales, yard sales and just plain looking through the trash for treasures. Some of the records I've found while digging though collections in the past have blown my mind, like the time I found the FRED LANE LP for $8. Or the time I came across the first MELVINS LP on Alchemy Records in a used bin for $2. I can't even begin to describe how happy I was when I stumbled upon a yard sale where every record was $1 and I walked away with first pressings by THE DEAD BOYS, THE 101er's, GANG OF FOUR and 27 others. It was mindblowing. I actually checked in with the guy selling the stuff to make sure he wasn't about to commit suicide. (He said he was moving and couldn't afford to ship it.)
A guy named Warren Hill also likes to dig through record collections, but he found a real one of a kind. While searching through records at a yard sale, he found a lost acetate of the VELVET UNDERGROUND and bought it for 75 cents. It contained alternate versions of VU songs that possibly had never been heard by the public. What follows on this download is the story of finding that record and figuring out what to do with it. The interview is conducted by Erin Yanke in her long-running audiozine, Life During Wartime and the story is interspersed with audio from the acetate. I'm not gonna tell you anymore because it would just ruin the whole thing for you. 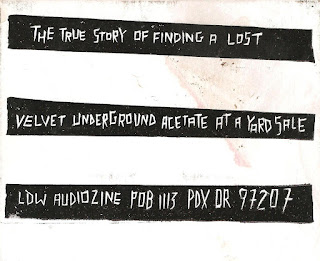 If you would like to hear more episodes of Life During Wartime, be sure to click on the "Audio Zine" tag below.
Posted by Harvester at 4:38 AM

Hey man ,you always post the most obscure stuff! I try to post things no one else has posted ,mainly consisting of bands and solo projects I've been in over the past 35 years or so. I recently featured your blog on my weekly podcast,and i plan on mining more from your site to play on the webshow. here's a link ,and thanks!
http://archive.org/download/W.g.o.d.August182012-3HourGODcastpodcastOfmusicYouWillHear/W.g.o.d.August182012-3HourPodcast.zip