SHITHEAD JONES was a teenage punk band from the bowels of Huntsville,AL who were known by very few during their brief existence. Like many teenage punk bands in Alabama, they probably started because this group of friends was bored and there were some instruments sitting around. Ramesh played the bass, Kevin sang, Jay Kaos played the guitar and Ryan (who had the unfortunate nickname "Pube") banged on the drums.  I saw them play shows at Gorin's Ice Cream in downtown Huntsville numerous times, playing to almost no one. Even though it seemed frustrating to the band that no one really wanted to watch them, they played with an energetic determination that I found inspiring. 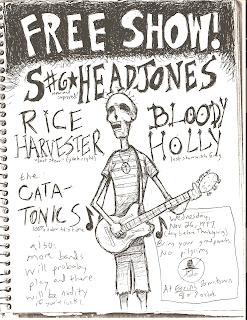 I read once that BLACK FLAG showed up to a show in the middle of nowhere and hardly anyone came to see them. Henry Rollins started complaining about how he didn't want to load their equipment out to play to a handful of people. Chuck Dukowski said that they had to. They had to load out and play their hearts out whether it's 5 people or 500 because that's what they do. They give their all in every performance no matter what. SHITHEAD JONES never had the option of playing to 500 people...maybe not even 50. Still, they played their hearts out to empty rooms and I sometimes think of them to this day when my band is playing a less than stellar show on tour. 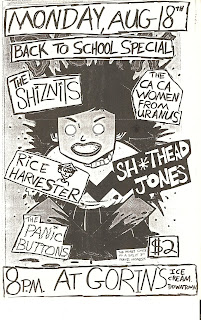 This download contains everything I know of by the band in all of its falling-apart, ramshackle glory. The first 5 songs are from a random tape they made at home (turn it up fukkin' loud...bad quality) and it is followed by an "interview", where their bass player, Ramesh talks to the singer, Kevin at a show in Huntsville. The last two songs are from a recording "sesh" in Harvest, AL when I asked the band to record some songs for a tape comp that I was releasing. All of the sound quality is pretty awful, but this is what happens when you get 4 broke punk kids together who want to spend absolutely nothing on their band. I love it. 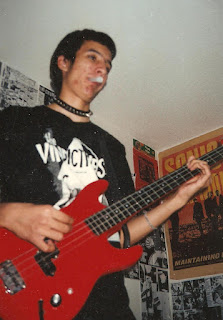 This is the hard part that I don't wanna write...because I'm sick of writing about dead friends...because it exhausts me to think about all of the things that I (and we) could have done as a community to keep an old friend on this earth a little bit longer. It's too late though. Ramesh Narayanan took his own life a little over a week ago in Chattanooga, TN and it breaks my heart. I met him at a show at the Tip-Top (a bar in Huntsville that let kids in for some reason) back in 1993 (I think) when he was hanging out with his friend, Blair, who I also met that night. I soon realized that being friends with Ramesh meant it was a package deal and I would also spend the same amount of time hanging out with Blair. It was fine with me since they were both fun to be around, usually had good ideas and had excellent musical tastes. There was absolutely nothing to do in Huntsville, so sometimes they would pick me up in Blair's car and we would just drive around town listening to RANCID. I felt like I was part of some weird, secret special pact when they invited me to be in their home recording project, A.O.A. I appreciated it when they would come over to drag me out of my house and go do anything. They were fun to be around.
Like many teenage friendships, people tend to move away and start doing their own thing. I moved away and started touring a lot. Blair moved to Asheville and did the same. I soon ended up in Chattanooga, sharing a living room as a bedroom with Ramesh. Our relationship became complicated and difficult at times, but he still remained close and one of my oldest friends. Over the years, our paths crossed a lot. I moved a lot and he did too, but we kept in touch where we could. We even started another band together in the early '00's, but we were so scatterbrained that we couldn't even keep it together long enough to play one show.
I started trying to reach out a little more to him when I heard that he had moved back to his mom's house to take care of her, but I could never get much information out of him. I couldn't tell if he was embarrassed to move back home or if he was just to busy to talk about it or just thought it was a non-issue. We only corresponded through the internet for the last few years and when I ever returned to visit Chattanooga, the lack of his presence was always felt. When I heard that he was gone, I didn't want to believe it. I still don't. I didn't want to believe that he could feel so alone with such a large community of friends at his disposal, although I know that feeling as well. I don't know what was going on, Ramesh, but I do want you to know that I miss you. I love you. You made a huge impact in my life in a lot of different ways and I wish you would have known how many lives you have altered in this world. Since his passing, a lot of people have gotten in touch...people that I didn't expect and I forget that he knew so many folks: artists, freaks, parents, norms, queers, a rock star who shared the stage with The Boss, gutter punks and more. What can we do to reach out when our friends are in trouble? How can we offer a hand when we feel so far away? I know that I'm going to try harder to let my friends know that I care about them and try to be there when they need me, but what can we all do? It's impossible to always know what is going on in someone's head. I just feel so lost.

With this entry, this blog has been viewed over 100,000 times. Thanks for reading and paying attention to my ramblings as well as listening to all of these crazy recordings that I have. I appreciate it.

Posted by Harvester at 2:34 PM

One of the best blogs out there, Greg. Even if I don't download something, the reading is always worthwhile.

great post! i have 1 too many questions for you now. here goes...

1) what other bands, if any, was ramesh in?
2) what was the name of the band that the 2 of you started in the early 00's? are there any recordings of said band?
3) who was it that once shared a stage with bruce springsteen?

i believe i had met ramesh once at 1 of the chattanooga punk fest's in the past, but i'm not entirely too sure. either way, its a shame and i wish his family/friends the best. RIP.

1. Ramesh was in Friday Knight, Olde School Beer Drinkin' Robots, Que Mart, Eviction Rejected, A.O.A., Menace (not the "famous one"), Thursday (not the "famous" one) and probably some obvious ones I'm forgetting.
2. We were in a band called Skeleton Head, Wyoming. Eric Nelson (from Jack Palance Band/Hidden Spots) and Scott (now in Possible Side Effects) were also in it. We actually did play one show, but only Eric and I showed up for it. Like I said, scatterbrained times. There's no recordings.
3. We grew up with Andrew from Against Me. Here is his awesome teenage punk band: http://remoteoutposts.blogspot.com/2011/11/jawas-discography-19941995.html

ah man, gotta love QUE MART and FRIDAY KNIGHT. i've got the FRIDAY KNIGHT 7 inch. that might be how i met him. i've always been curious about OLDE SCHOOL BEER DRINKIN ROBOTS. still such a shame he passed like he did. geez.

Hey, thanks for writing this. I've been off the grid for a while and hadn't really been in contact with anybody since before all this mess but today I'm catching up with everyone. I guess I don't have too much to add but if anyone wants to holla I'm blairmenace at gmail.

I've still got the Bridge Kids tape that I need to digitize once I have the means. It was Ramesh, Ryan Maddux, and Bob Presson. I think the band was around sometime between 2000 and 2002 in Huntsville. Thanks for posting this Greg! Rest in peace Ramesh, I miss the fuck out of you.

I would love to hear that Bridge Kids tape...or even put it up on this site.

I stumbled across your blog and this is the first I heard about Ramesh. I don't even really know what to say. RIP.

this ramesh's mom. thanks for the tribute. he is the love of my life, and wish he had told me of his pain. don't know if i could have changed anything; i know i couldn't have changed those few who betrayed him.

I never knew my son was called Pube. Thanks for adding that to my knowledge bank. LOL! My heart just sank when I heard about Ramesh. He spent a lot of time at our house and was like another son. The world is a little poorer in his absence.

I'm sorry that you have to learn about your son's teenage nickname through a punk rock blog. I'm pretty sure it was one of those things that people started calling him against his will and just stuck. Luckily, we all grew up soon afterwards.I still miss Ramesh daily. He was a special man.

Greg...do you still have this file. The download does not work?

Ryan!! Done for you.