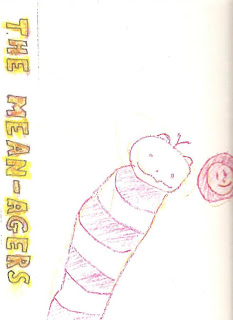 THE MEAN-AGERS were a band of four snotty, bratty teenage kids who all went to Bloomington High School North in Indiana and robbed kids of their lunch money in order to pay for the gas to get to their shows. The band consisted of two girls and two guys who are possibly the most obnoxious kids I've ever met in my life. They bonded over their love of BLATZ (the beer or the band? Take your pick), huffing glue, cheap sex and skipping classes. They practiced in their singer's (Mean Amy) mom's house and accidentally set the house on fire once when their guitarist (Mean Chris) was trying to smoke banana peels. Within a couple of weeks of their first practice, they had recorded a tape of 12 songs that included such timeless hits as "Giving Head's for Teenagers", "I'm Not Good With Names, But I Dismember Faces"  and the 45 second anthem "Fuck Real Loud".
After hearing this tape, I knew I had to see them. I begged them to play a show that I was setting up for a little known political punk band from Florida called AGAINST ME. I had never heard of the touring band (does anyone know what happened to them, by the way?) and I was pretty sure no one else had either, so I asked THE MEAN-AGERS to play since they were starting to attract a pretty good following around town. The show was insanely packed, due to their popularity and  $700 was collected for the touring band. At the end of the show, Amy and their bass player, Leah approached me and asked when they were getting paid. I told them I would probably give all the cash to the touring band (who seemed really dirty and broke), but I could give them a few bucks for gas if they needed it. Amy got this insane look in her eyes and started punching me. Leah grabbed the wad of cash and ran out of the basement. I started to chase her, but their drummer, Jeremy jumped in front of me and simply said "Don't make me eat your tongue." I said, "What the fuck does that mean?" That's the last thing I remember because Chris clubbed me in the back of the head with his guitar and I passed out. 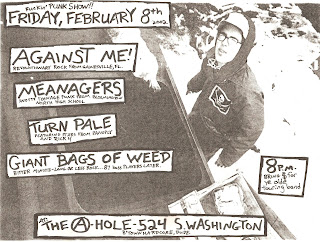 Almost everything I've told you so far is a lie, but it's probably what the band would want you to believe. The band did consist of four people (2 women and 2 men), the names were correct and they did write those songs, but their ages were closer to mid-20's. They were posing as a teenage punk band and they did a really good job of it. Their live set, as well as this tape, was simple, chaotic and kind of brilliant in its own way. Out of 23 songs, only 5 of them barely break the minute-long mark. At a minute and a half, the epic "Garbage Night" tells the age-old tale of finding food in the trash and Amy's vibrato scream after the breakdown still fucking blows my mind. Once you get into their zone, this shit rules.

This tape was originally put out on Friends and Relatives Records back in 2004 or so.
Members of THE MEAN-AGERS were also in the legendary noise-punk band PUPPY VS DYSLEXIA and JERK ALERT.
Posted by Harvester at 6:56 PM