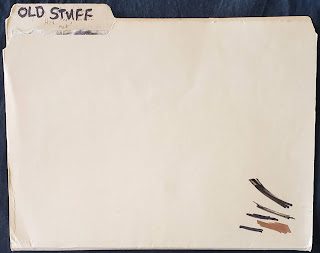 2020 was awful. There's no sense in belaboring that point. I easily spent more time online and in my room than any other era in my life. I'm not going to write about a specific band in this post, but I will provide links at the bottom of the post to the music from this year that helped me get through this bog of shit. Instead, I'm going to tell you about the good things I found or did this year while spending time in my room...stuff that made life a little easier or provided connection or respite from such a harsh reality.

BACH TO THE FUTURE VIII - THE ALL NIGHT BACH MARATHON
This is an event that has been happening in Providence, RI for 8 years now and usually takes place at Brown University. I've wanted to go for a long time, but have just never made the trek, due to the twin terrors of geography and finances. This year, due to the more pressing terror of Covid, the marathon was brought to our respective doors via the internet and WELH 88,1 FM (and Fujichia, which we'll get to in a minute).

The marathon is curated through the hard work of Sakiko Mori and features everything from classically trained musicians to experimental knob turners to rockers to plunkers and more, all interpreting the works of Bach however they see fit. It starts at 7pm EST and runs to 7am. I probably experienced up to 7 or 8 hours of the marathon in my house. During a time that has given me nothing but anxiety and depression, this event helped me to feel at ease in the world. I listened in the dark and while doodling and while baking cookies and while just looking out the window at the street lights. At one point, the radio DJ was an 8(?) year old kid. It ruled.

As of this writing on 12/30/2020, the link above is active and will lead you to the audio, along with an hour by hour breakdown of all the performers.

Jacob started this site in 1999 and then shut it down in...uhh...2009? 2010? During that time, it led me to a lot of interesting wormholes of information and way-out thoughts. I was sad to see it go away, because it was so wondrous and the internet is full of so much potential, but is largely populated by billboards. This year, Jacob brought it back in the guise of a creepy castle, somehow retaining the charm of its former incarnation while also being better. It is updated every Tuesday and has the tone of "Hey, how's it going? I just wanted to share this thing with you. Even if it's not your thing, we can still hang out." I don't want to get too deep with it, because it's just there to explore (and you should explore all over) and you can discover what works for you. My favorite parts of the site are when I kinda don't really know what is going on, but I'm still intrigued anyway. Like, there's a lot of gatekeeping that happens in the world, but at Fujichia, the gate is always open for you.

This one came in right under the wire (like 2 days ago) and I'm glad it came into my life, thanks to Tom Bubul. In this blog, Ren casually and eloquently discusses touring with his bands and experimental projects. Here is why I like this: The music I play is (in the simplest terms) largely standard punk and generally falls within the confines of a culturally accepted form of sped up rock n roll.  Ren plays more chaotic, experimental and difficult music. Yet, I'm sure that we have both answered the question of "Did you make any money on tour?" with "No, but the audience in [insert city here] tried to fight me for playing music."

I found myself laughing out loud throughout this entire blog because I recognized so much of the casual chaos and real danger that Ren writes about. It's compelling and fun and horrible. I highly recommend this to anyone who has ever pulled up to a show in a dying car or woken up in a room with several stray dogs.

BECOMING A PATRON OF THE ARTS 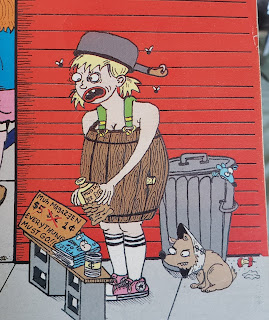 I'm not sure when I first came into contact with Janelle Hessig's art, but it was probably her back cover drawing of teenage girls drinking, spray-painting and puking on the back cover of the RAOOUL 7", which I was obsessed with in high school. As a kid, I was really into Peter Bagge, Julie Doucet, R Crumb and Dan Clowes. Janelle's comics seemed to take some inspiration from them but also had it's own voice and felt closer to my life because it was filtered through the lens of grimy punk houses, rotten food and crust-puff lifestyle... and all with gut-busting laffs and style. I followed Janelle's work through record covers, her self-published zines, art shows, flyers and more. As we've all aged, her work has grown up with us and doesn't try to stagnate in some sort of pema-adolescence, which I really appreciate. I was happy that Janelle started a Patreon page this year, so that after all this time, I could be a real card-carrying member of her fan club. I look forward to every bit of art from her and hope there's a book in the future, full of gigantic asses, puking ducks, stink lines and the laughter that we need in this sad, desperate reality.

To be transparent, this is my thing and it's on instagram. I went to a record swap in 2019 and noticed that a lot of people were selling old punk flyers. That kind of commerce is definitely Not My Thing, but I do own hundreds of flyers because I can't throw stuff away. I was talking to a friend at the swap about this collection and he encouraged me to document it in some way, because what use is it to just sit in your closet? So, I started an instagram page and kept it simple: the city, state, year and name of the person who made the flyer. That's it. I got really burned out on documenting the stories of everything by writing this blog...and also, it just causes problems in a lot of ways. Fast forward a year and the pandemic hit. I got a little more wordy because I have a lot of time on my hands and it felt better connecting with people by telling a small story about something that happened at the show, if I could remember anything. I decided to be more open to being wrong too...because our memories are faulty. It's updated on most days when I feel like it and usually happens when I'm drinking coffee. If you've been a fan of this blog, you'll probably find something you like in there. 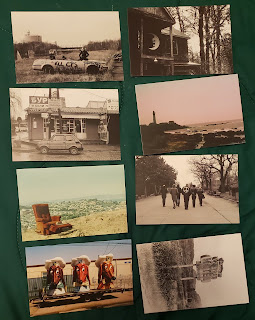 Over the last few years, I've been trying to focus more on film photography and get good at it. To be honest, I still don't know what I'm doing, but it's fun to try and figure it out. Pre-pandemic, I had been tossing around the idea of organizing a DIY photography show with a few friends, but the world quickly squashed that idea flat. I still wanted a way to share photos with people that was offline and accessible when I got an envelope in the mail full of postcards from my friend, Cory Bell. He has been taking photos on 110 film and turning some of them into postcards (find him at @littlecameras on the photo social media). My roommate, Anandi has also been making postcards of her photos for many years now. I wanted to do this too, so I got some pointers from the two of them, picked some photos and had my own batch within a couple of weeks.

It's feels really good to connect with people like this and throw my 35mm photos out into the world in a way that is cheap, easily accessible and supports the USPS. Learning how to use online photo editing for the first time in my life has kept me busy as well. I'm all sold out of them for the moment, but I'm hoping to make some new ones in the new year.

Below, in bite-sized formats, are music releases from this year (and 2019) that got me through this heap of shit, in no order of importance. I always recommend supporting artists directly when you can.

ANGEL BAT DAWID - "The Oracle" LP - This came out in 2019 and is the next generation of amazing cosmic jazz. It was recommended to me by my longtime  friend Adee, who always has the best taste. I also think it's worth noting that this was recorded on a phone.

MESSAGE TO THE RAT KING - I don't know if these fools wanna stay anonymous, but it seems that way for the time being. Compelling, interesting music from people who know what the fuck they're doing.

PRISONER - The sound of wondering if your friends are ok

PATRICK JENNINGS - "Immediate" LP - This one also came out in 2019, but I can't stop listening to it. I went on tour with Patrick's old band for nearly 3 months once and it was awful. I'd find myself on the verge of strangling him on some nights only to have him pick up the guitar and deliver his songs with a conviction and energy that would stop you in your tracks. One of my favorite songwriters. I'm glad we're both sober now.

2 LAZY BOYS - "The Recline Of Western Civilization" LP - Simple sounding, yet intricate and insanely catchy pop from Oakland, CA. This record is addictive.

ALL HITS - "Men and Their Work" LP Saw them in a park in Portland last year and I immediately wanted everything they'd ever put out.

DON'T ASK / FLOWER ZOMBIES Split LP  - Got this for one of my favorite Oakland basement punk bands and was also pleasantly introduced to Japan's FLOWER ZOMBIES. A great LP all around.

Also, shout out to all the friends who have sent random texts, shared nighttime phone calls or just sent anything worth laughing about. Keep an eye on your loved ones in the coming year and take care of each other.

More into mail than the online world always.

All mail gets a response.

Posted by Harvester at 1:56 PM

Hey there,
Any chance you’d wanna reupload The Carnal Knowledge stuff that was posted here like 10 years ago? I’ve been trying to find their stuff everywhere and have come up empty.
thank you for your service,
dom