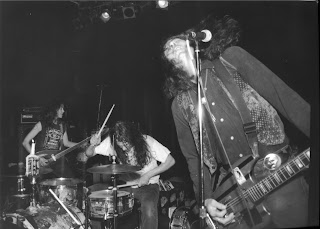 I don't believe in heroes or idols, but if I did, Fred Cole would be the closest thing I would have. Of the few times I hung out with the guy, I can tell you that he is the real deal. He cut his own masters for his records at his house on a lathe machine that was used for the KINGSMEN'S "Louie Louie". Also, he built that house out of salvaged material. When the music industry failed him, he just became more independent and did his own thing until they came looking for him. I once drank pints of Jagermeister with him and then he got in a van at 2 am and drove to Ohio. He got a tattoo of his own band on his fucking face. Along with his wife Toody and his friend Andrew, he co-fronted the best band ever and played some of the most magical, cathartic shows I've ever seen in my life. As a rule that has not failed me at any point in my life....


I DO NOT TRUST PEOPLE WHO DON'T LIKE DEAD MOON

It's simple, it's real and it works. The discography of Fred Cole acts as it's own story that I don't need to tell you. Seeing Fred Cole play live in any setting also told it's own story. As Fred and Toody got older, every show became more special and had so much nuance. At solo shows, Fred would slyly tap the mic stand to act as Andrew's missing snare hits and look up. He would sing a sweet line about Toody and quickly tap his boot against hers. After 50 years of marriage and at least 30 years of hearing these same lines in songs, you could still catch Toody trying to stifle a smile as it leaked out the side of her mouth. I don't know what I can say that you're not gonna read or hear anywhere else, but Fred was real and magic. I try not to be sad about it, because death is part of this deal with life and he lived a good one. He left behind a whole catalog of music that we can all enjoy for the rest of our days here. 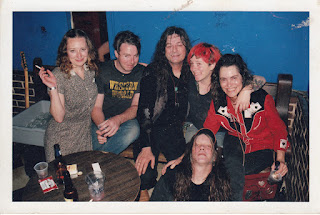 DEAD MOON with Daun, Shannon and me.

I co-hosted this 2 part radio show on Maximum Rocknroll with my friend Alex, two days after Fred passed away. Part one is a scratching of the surface of his career...everything I could find besides DEAD MOON. If you keep digging deeper, you'll find so much to hang onto. Part 2 is nothing but DEAD MOON for over an hour....a lot of their "hits" and a lot of deep cuts. Please enjoy.

It's like a broken smile
A step apart that gives you style
It doesn't need explaining
You know it's fall when it starts raining
It's just the way it is.
Posted by Harvester at 10:26 AM

Yeah, I try not to be sad too, but some days it doesn't work. I saw them play so many times, more than any other band, but I'd sure love one more show.