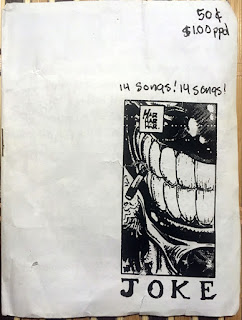 Bands like to bill themselves as "inept", but then you hear their tape (bandcamp/8 track/cloud shitter) and they seem to keep it together. It seems like they know how to play real chords. Maybe their drummer can clumsily make their way through a basic time signature for the entirety of a 45 second song. Maybe their drummer even has a drum set!! Alabama's JOKE is clearly inept. and can barely cover any of these bases and that is why I love them. They didn't even know how to play the right chords to their cover of FANG's "The Money Will Roll Right In". Hell, they didn't even know how to approach RORSHACH's "Clenching" (much less spell their name right), so they just made up their own music and sang RORSHACH's lyrics over it. Their original songs are an utter train wreck. Don't have a drum set? Take an old person's walker, duct tape some cowbells and metal to it and hit it with a stick. Don't know how to record your band? Get a cassette at K Mart or tape over your grandpa's sermon on a broken boombox. Play anywhere. Don't follow the script.
JOKE split their time between Madison and Huntsville, AL in 1993. They consisted of Freud Reia on guitar/vocals and Joey Tampon on drums/vocals. They lasted long enough but not that long. That's about all I know. Joey went on to play in THE SLACKERS, JOEY TAMPON AND THE TOXIC SHOCKS, THE 3D'S, THE RADIOACTIVES and more. Freud later played in THE PERFECT HUMAN EXAMPLE and THE CRIMINALS.

Their very own Discogs page

Thanks to Jack Saturn for holding onto this tape, digitizing it and sending it over. 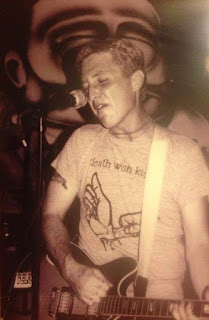 Posted by Harvester at 9:16 PM

Sometimes when you’re just having fun doing what you love with a bunch of your friends you end up making something great. This seems to be the case with JOKE as you said they are inept but you still enjoyed what they created.

Love that death wish kids shirt.. That band's 7" & later on the discography blew my late teens/early 20's mind. Still listen to them on a pretty regulat basis in my mid 30s