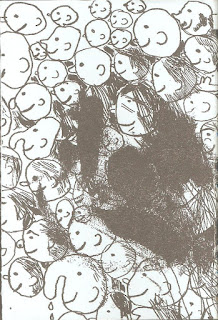 \
A few years ago, my old band played a show in Brooklyn at Death By Audio that was well attended and featured good bands, but was (by my account) kind of boring. One of my favorite memories though was looking up from the drums during our last song and seeing my friend Mike Taylor pogo-ing like a madman. He was one of four people who seemed to not have their feet nailed to the floor. Mike has put so much of his energy and time into visual art in the last 20(+) years that I often forget that he, like most people in this world, is a multi-faceted individual with a plethora of interests...including energetic punk. I don't know why it surprised me to see him up front mouthing the words to our cover of "Kids Of The Black Hole", but it did...and it made me so happy.
Fast forward another year and I got this tape in the mail. On it, Mike plays guitar and sings. A dude named Roy plays bass. Gina Marie, who I just met last week in Berkeley, plays drums. In a review in print, I said something like "I don't know what post-hardcore is, but this is probably post-hardcore." I also said that it sounds suspiciously like present day New York. Coming from someone who has never lived there and actually kinda doesn't like the place, you can take that however you want. It just sounds dark and desperate in all the ways that I love. It sounds like walking down the street and being plagued by all of the thoughts that make you want to kill. The kind of music that makes you say "Fuck you" every time you pass a cop or some shit in a suit...not because you're some young reactionary punk, but because you're pushing 40 and have been dealing with it for your whole goddamn life..being too aware of the power imbalances, the gender inequalities, all of the people who have been killed by pigs, the racism of capitalism, etc, etc and feeling like there's nothing you could ever possibly do to change anything....or am I projecting again?

You can order this tape from them if you follow the link.
They recorded an LP and might've broken up. I bet it's great. You should put it out. 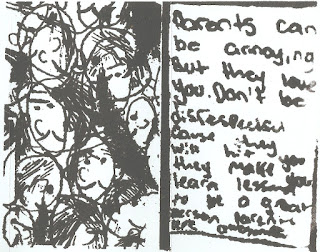 Posted by Harvester at 7:11 PM