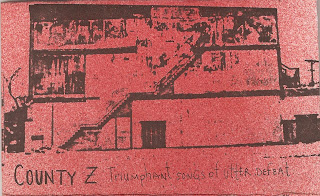 County Z remains one of my top 5 favorite bands of all time. In a time when punk was making me groan (minus the genius music that was/ still is consistently coming out of the deep southern US), County Z was banging out some noise that was inspired by living in homemade shacks by the river, hopping trains, cheap whiskey, big old rotting midwestern houses, hot dish, rusting clunky bikes, homemade amps, DIY for real, broken shit, and homemade tattoos. Seeing them live was always exciting because it was always different than the previous time. I never saw them play a bad show. This tape shows COUNTY Z in their early, formative stages, but is no less serious or intense as their LP that came out a year or so later. The songs "Priest" and "84 Hours" still make the hairs on my neck tingle. "Rotten Living" and "Liquor Store" have been mixtape staples since the dawn on this century.
This band was (and still sorta is) so anti-technology and anti-digital, that I asked them if it was okay if I put their songs online. Well, I asked the most anti-computer one of all of them. He said "yeah, I just used Craigslist for the first time...it was weird. Computers are fucked, but 'I guess I want people to hear my band." Perfect for listening to on a cold day by the river. 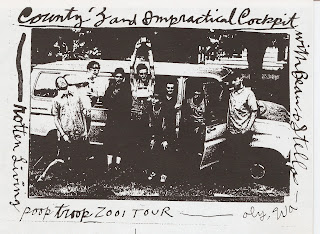 Thanks so much for doing this project! I've been wishing that someone would do this. so many of my tapes have disappeared over the years, and my international globetrotting lifestyle has made me a big fan of the i pod... I am so happy to be able to listen to county z when I'm on a bus in Asia.
It's really great that these tapes etc are being preserved in one place in a different format.
Thank you, Ellen

You are very welcome! It's exciting for me to know that someone is listening to this on a bus in Asia or even a suburban house in Kansas. I have a lot more stuff lined when i get home from tour in a week or so. Thank you for your comment. Made my day.

The link is broken. Has the file been taken down? Would you be willing to trade for MP3 versions of the tracks off of Graveyards and Grocery Carts?

Mediafire locked/suspended my entire account because they are ill-informed fucksticks. Anyhow, the download is re-uploaded now. No need for the trade. I already have mp3's of that LP, but thank you for offering.

this made my day! wow thanks for this gift. I got rid of my record player in a break-up and then all my LP's shortly after. I miss this one....
Also it is bringing many memories of the amazing shows i saw here in MPLS about 10 years ago.
Thanks, thanks ,thanks!