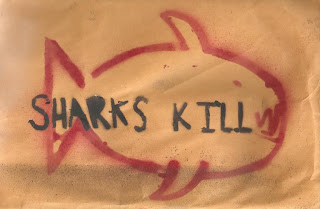 Portland, Oregon's SHARKS KILL may already be familiar to some readers of the blog because I have mentioned them in posts with ALL IS LOST and PUNKY ROCKIT...or maybe you lived in Portland in the mid-90's and saw them playing house shows during that time. If this is your first introduction to them, welcome.
I haven't had this tape since the mid-90's, but it was mailed to me by a longtime Portland resident who shall go unnamed...because when I received it in the mail, the manilla envelope that the tape originally came in (pictured above) was still sealed, meaning that the previous owner had probably never listened to it. My friend Harry used to play this tape in our shared house in Alabama and he always liked it a lot more than I ever did. Still, it's funny to say that you don't really like a tape, but there are still certain lines from songs that stick in your head for decades, even though you truly haven't heard them since 1998. There's some kind of weird power in that. So, when I pulled this tape out of the envelope and played it in my room in 2018, I was immediately mouthing the lines "Welcome to Portland...it gets dark and dreary here..."
SHARKS KILL walked that line between catchy indie-punk and emo. Since this is a place where I try to be brutally honest (in a way that has led to many, many awkward conversations with friends and dead friend's parents over the years), I will tell you that I am a fan of being in touch with your emotions, but I am an enemy of emo. SHARKS KILL crosses too far over the line for my tastes in a few circumstances, like "Forever 17", but I would be lying through my teeth if I didn't say that I have flown down dark hills alone on my bike late at night yelling the line "Rock and roll forever!!" "Crush Song" is the kind of song that you can only write in 1996 and even then, maybe not.. Still, it's lodged in my brain and I kinda love it. "Postcard" is such a time-and-place song and really catchy...I couldn't believe it wasn't on the band's 7" from a year later. Something about the otherworldly and tinny recording adds to the charm of this whole thing.
On this tape, they're a two piece, but they added Tasha on bass for their later 7" record. They didn't last long after that. Members went on to be in HOPE & ANCHOR, VEGAS THUNDER, TOUGH LOVE, BOYS OF SUMMER, DARK SKIES, FUTURE WEST and more. 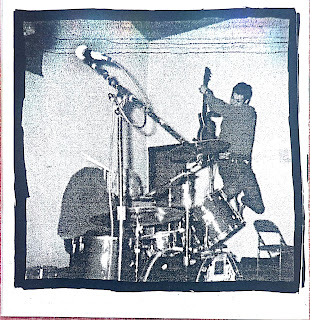 Posted by Harvester at 1:43 PM

I probably sealed that envelope myself. It's pretty amusing that 20 years later it was still sealed.