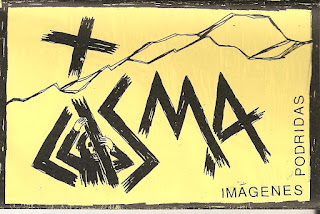 I just returned from a mind-blowing European tour with my band. Like all tours, there was a string of not-so-great shows. You see, I play punk music and I have devoted my life to punk, for better or worse. Oddly, I have high expectations. I want other punks involved in this scene to play music like they're gonna die afterwards. I want punk writers to speak from their heart with guts to spare. I want punks to look fuckin' punk, fucked up but approachable. This doesn't necessarily mean mohawks and bullet belts...it means you've lived the life you've been given with nothing holding you back. I want punks to play music like they mean it and I want to feel the intensity coming from them. That being said, we had just played a few shows with bands that seemed like they might be happier at their day job and I was questioning what exactly we were doing here in this foreign country. Then, we played with MUNDO MUERTO from L.A. As soon as they struck their first note, I was instantly reminded of why I love punk. They played with passion and a fierce energy that was infectious.
After their set, I looked at what they had for sale and saw this tape by CISMA. Their roadie, Marta explained that they were a fuckin' hardcore band from the Canary Islands! I was all like "What?" and she was all like "Yeah!" and then I was all like, "Dude, I gotta get this!" Seriously though, I figured that the punks in MUNDO MUERTO wouldn't be peddling some trash along with them on their tour and I was right.
CISMA plays raw, energetic hardcore that makes me wanna smash my head through a wall. They have a fucked up, noisy guitar sound that rules. Everything about them screams "Punk!" in a way that makes my heart sing. Just fuckin' download it.


Download CISMA
If you'd like to order a tape for yourself, get in touch with them here: cismapunk@gmail.com 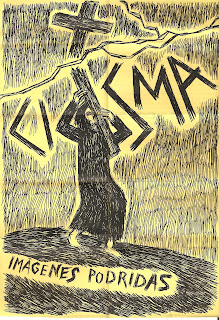 Don't get me wrong about the intentions of the European punks. The squats we played, the people we met and the way people get shit done over there was inspiring to say the very least. If you can keep an anarchist squat open and vital for 40 years, you're definitely doing something right. If you can manage to set up a show for some dumb US band, feed them, give them a comfy place to stay, give them more alcohol than they could ever want and still manage to do 40 other things in the same night, you're doing a lot better than most people in my country. I can't thank the punks in Europe enough for their hospitality and organization. All I'm saying is that we had a rough 4-5 days there and MUNDO MUERTO and Bremen, Germany put us back on track. Thanks.
Posted by Harvester at 11:40 AM

glad your back greg!!! ummmm, did you do a new zine? i just read some old post. if you did, will you send me one? that would rule.
xo
sarah sky

No, I didn't, but your mailbox will be first on the list when it is done.

Hey, Greg. Happy you guys made it through with the help of some very hospitable and caring if not just plain outstanding punks. Much respect for them. Glad you're back, man.

Thanks for this - both the tape and the tale. Couldn't agree more on all fukkn accounts!! Welcome back, and let's keep sharing some sounds!

(great show tonight, by the way)

glad to have you back, greg! will NEON PISS be playing chattanooga punk fest this year?

No punk fest this year. We're too broke and too far away. Our bass player, Bryan will be there though.